The story of a first field hospital in northwest Syria

A spontaneous local response to accommodate the emergency health requirements of new and escalating crises, and a first step toward establishing an alternative health system.

The first peaceful demonstration that began in Syria was in Damascus on 15/3/2011. Wider civilian protest movements soon followed in Dar’a, erupted in response to the alleged arrest and torture of children accused of painting anti-government graffiti on their school walls.

By April 2011 there were several protest areas in Idlib governorate and all Syrian governorates in support of people in Dara who were treated hyper-violently by the security forces as they demanded the release of their children.

From the start of the protests until 2019, the deaths of some 660 thousand Syrian people were documented. Some 13 million Syrians out of 22 million were displaced inside and outside Syria. 98% of Syria’s population are living in extreme poverty, below $1.90 per person per day, according to the Spring 2021 report series/Socio-economic conditions and shelter issued by HNAP.

On 20/5/2021 there was a large demonstration that headed from most of the countryside of Idlib and moved toward the city of Idlib. It was known as the Friday of Freedom “Azadi” (blue arrows in Figure 1). The Syrian security forces confronted the peaceful demonstration by firing into the crowd of demonstrators heading from Jabal al-Zawiya, Ariha, and Ma’aret al-Nu’aman towards Idlib city, at a military checkpoint set up in the village of al-Mastouma, killing 35 and wounding about 105 people. At first, the injured were evacuated to private hospitals near the area of ​​the accident, in the city of Ariha, but in vain. As it was closed to the injured by the authority of the security branches in the city of Idlib (the green arrow in Figure 1). The wounded were evacuated to more dıstant areas. Reception of injured and taking care of them was mainly in three private hospitals: Adnan Kiwan Charitable Hospital / Kansafra, Al-Hikma Hospital, and Al-Khatib Hospital / Kafrnbel (Green Arrow 2). This incident was taken as a crucial piece of evidence of the inability of medical staff to benefit from the available hospitals due to the influence of the security forces and their ability to close some medical facilities when they have a mind to do that, prevent access to them, or arrest the medical staff and the injured. So, following this incident, planning began to establish small mobile parts hospitals.

Figure 1. Demonstrations heading towards the city of Idlib, lines for evacuating the 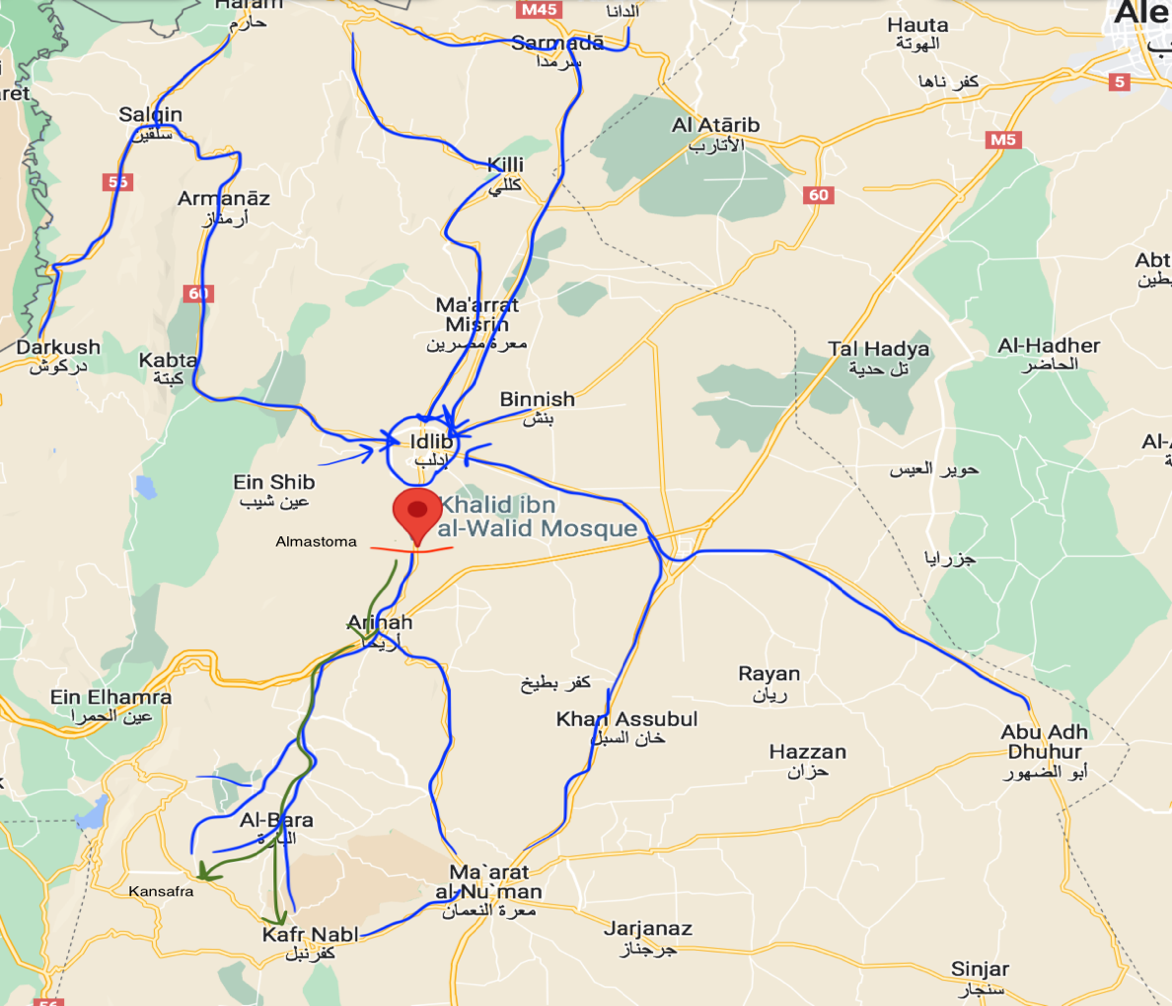 On Friday, 3 June 2011, three civilians were killed by the Syrian regime forces during the demonstrations that occurred in the city. On the day following, the mourners for the dead were shot during funerals. 10 civilians were killed. On Sunday 5 June, the city was besieged by the security forces. Military helicopters were engaged in air fire, thus killing 25 people, bringing the number of deaths to 38 people within three days, including eight security personnel. On 6 June, there was major fighting in the city between defectors from the Syrian army and the security forces, resulting in dozens of deaths on both sides. On 7 June, the regime sent large military reinforcements to take over the town, put down protests, and knock down the army defectors. Mainly, from Idlib city via the Aleppo-Lattakia Road, and from Jurien via the Al-Ghab Plain Road (red arrows in Figure 3). Nearly everyone fled the city in different directions once the army advanced for fear of atrocities and massacres against civilians (blue arrows in Figure 3). Some people escaped and migrated northward into Turkey through unofficial border points. This was the first known displacement of Syrians outside Syrian territory. Others moved south and east towards Sahl al-Ghab and Jabal al-Zawiya. There was no fleeing towards the west, as the Syrian regime forces appeared to have a tight grip on western regions towards the Syrian coast.

Setting up the first field hospital

The closest hospital that could receive the injured demonstrators and civilians targeted by the regime was Adnan Kiwan Charitable Hospital. The hospital was located about 40 km away, in the mountainous areas. It was the hospital I was working in at that time. It was a very long way and dangerous because military helicopters were flying overhead. So, we set up a field hospital at the closest point to the areas of clashes in and around the city of Jisr al-Shughur. We managed that with very modest resources provided by the families and by Kiwan Hospital. This field hospital was established on 6 June 2011 in Tal Awar village, south of the Aleppo-Lattakia highway. The main purpose of this hospital was to provide life-saving services to civilians fleeing the city, such as chest drainage, fixing open fractures, and then transferring the injured to other hospitals in Kansafra, Kafr Nobol, and Maarat al-Nu’man (green arrow in Figure 3). The hospital was founded in the village chief house, who prepared the essentials the day before we arrived. I, one doctor, and some volunteers from the area worked for three days until the fleeing civilians were able to settle in the villages and towns near the city of Jisr al-Shughur. The injured, who headed north, crossed into Turkish territory with civilians, as the Turkish authorities placed ambulances near the border to receive them. The house that embraced this first field hospital in the governorate was bombed and destroyed later, within the framework of the organized policy followed by the Syrian regime of reprisal attacks against anyone who provides medical services to people in areas outside its control.

Figure 2. The house in which the field hospital was established. 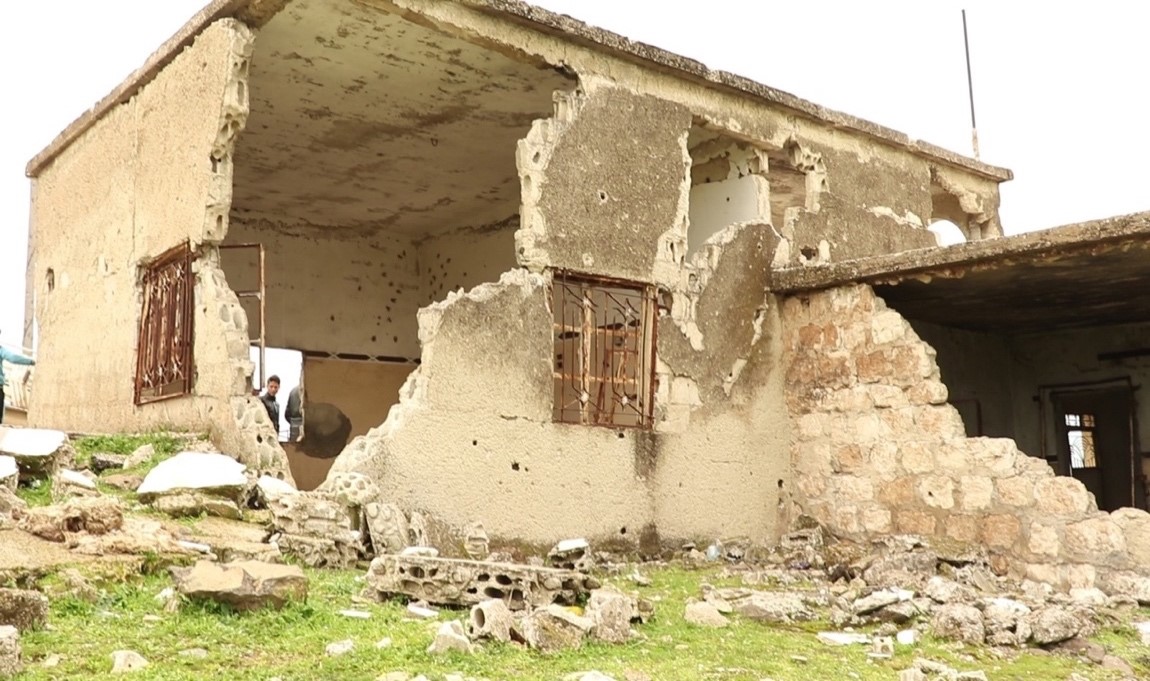 Figure 3. Army advance lines towards the city of Jisr al-Shughur, the displacement of civilians, and the lines of evacuating wounded from the field hospital. 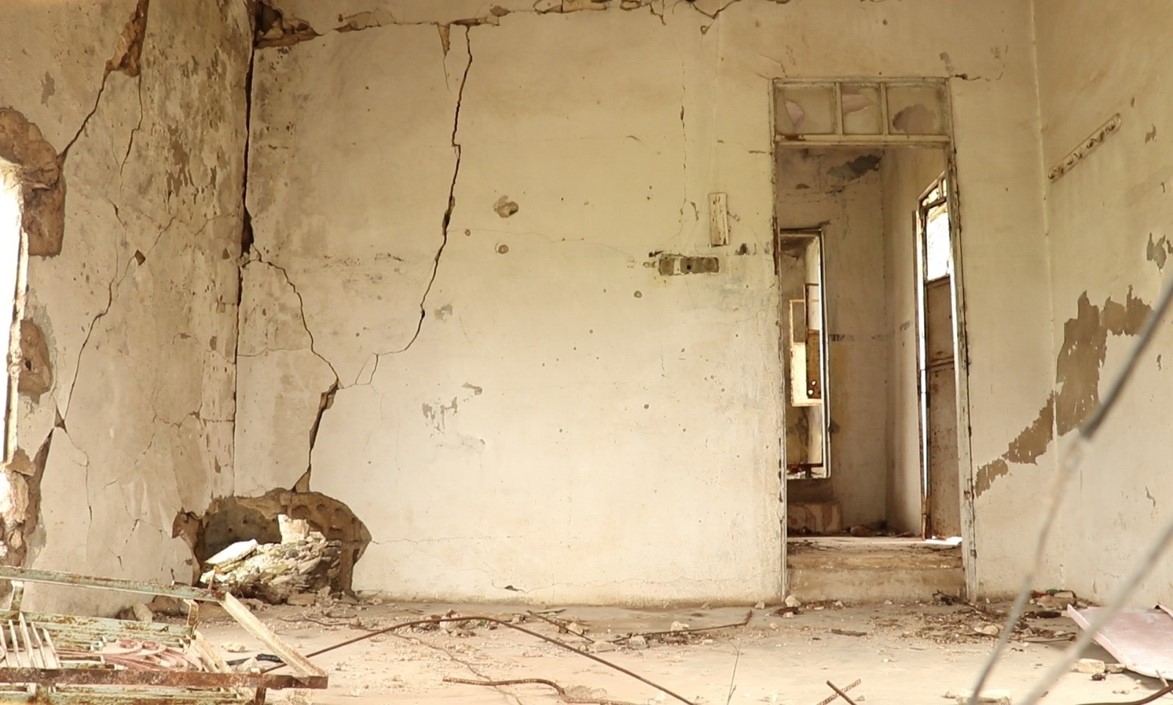 From our point of view as clinicians, the trial was successful. We were able to provide life-saving services to dozens of injured people without the need to endanger their lives as a result of the time taken to reach the nearest hospital or the danger of the road. Many medical staff and volunteers took the initiative to establish small field hospitals in areas outside the regime’s control, such as Al-Iman Hospital in Sarja / Jabal Al-Zaw. Then, the idea developed more towards the establishment of large hospitals within the mountains, such as Maghara Hospital in the Hama countryside.

The idea of ​​field hospitals was expanded in areas outside the control of the Syrian regime. Their forms and services were different according to the needs of each area. Hospitals were established in basements of homes, schools, health centers, government buildings, poultry farms, and caves. Sometimes, hospitals were newly constructed in areas where there was relative safety from shelling or air bombardment, especially in areas close to the Syrian-Turkish border. These hospitals were linked to each other by informal coordination networks. Until 2015, mobile grips were relied upon. Then, WhatsApp groups and finally the central referral system were approved. Also, in the early stages, around 2012, hospitals were linked with the Syrian medical diaspora networks; in view of the fact that so many Syrian doctors visited these hospitals to work in, or to provide some medical support.

Later, most of these hospitals received funding from Syrian organizations first, and then from international organizations. this funding increased significantly after the United Nations Resolution No. 2165 in 2014 concerning the creation of a mechanism to allow uninterrupted humanitarian assistance to enter across the Syrian border. In 2013, with the increase in the number of field hospitals and the increase in the need for inter-hospital coordination, and also to bridge the large gaps in the health system left by the nonengagement of state institutions in areas outside the regime’s control, and the cessation of providing critical medical services such as the routine vaccination program, we announced the formation of an Idlib Health Directorate as a central administrative structure for leadership and governance of the health sector in Idlib Governorate on March 1, 2013.

In recent years, with the increase in the flow of humanitarian assistance across the borders, the accumulation of experiences inside Syria, and the stability of the trials, some of these hospitals such as Bab al-Hawa Hospital, Akrabat Hospital, Darkush Hospital are now delivering very advanced services surpass that of the private sector, including tertiary services. so, it is no longer called field hospitals but rather became sustainable health care hospitals. These hospitals will be an essential part of the future health system plan for this region. However, as long as the conflict continues, there is still a need to establish small temporary hospitals near the front lines of the conflict.

Figure 4. Al-Iman Hospital in Serja after being bombed by military aircraft. 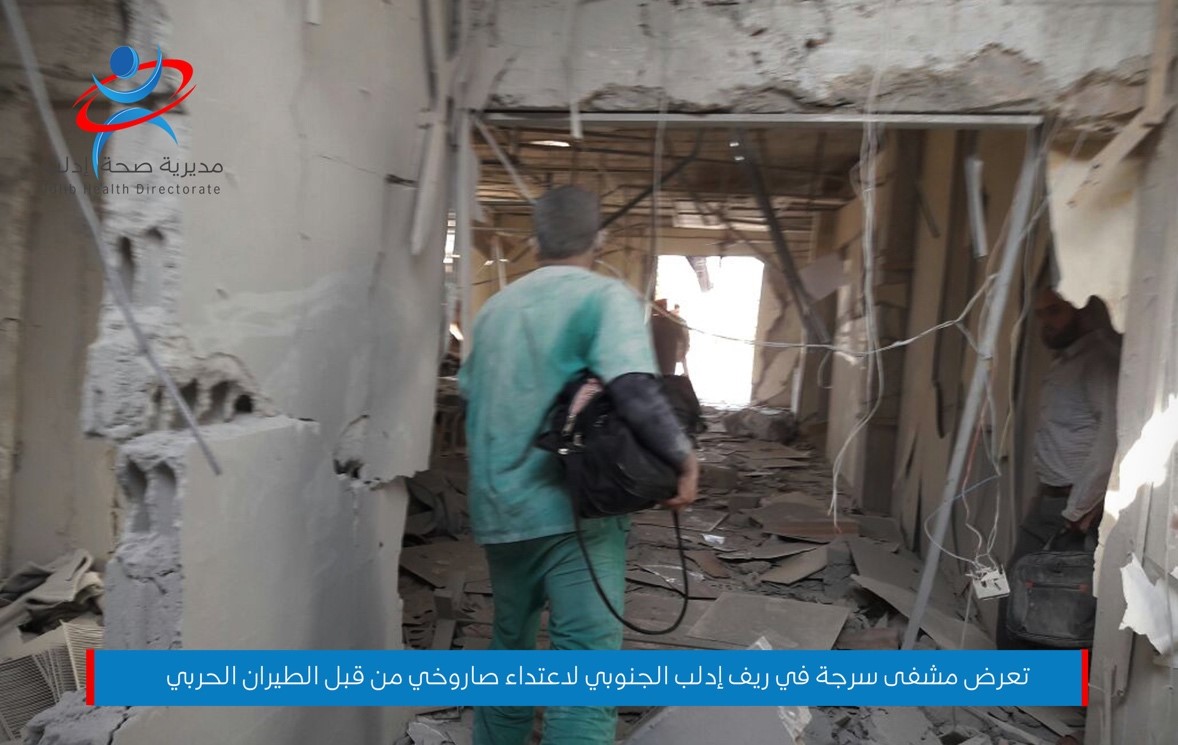 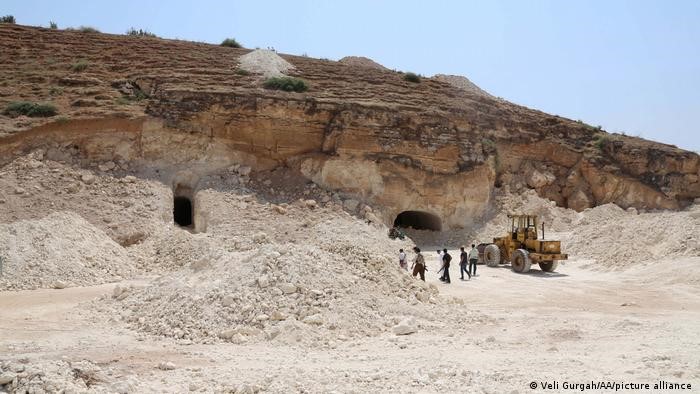